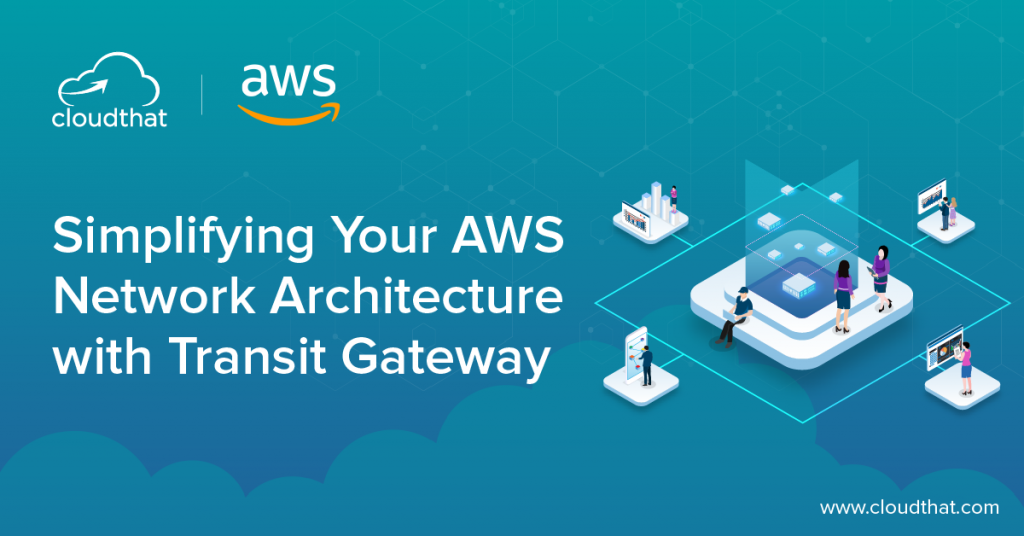 As your cloud infrastructure expands globally you need to find out a way to connect your resources which are in different VPCs. A Transit Gateway is a network hub that you can use to interconnect your virtual private clouds (VPCs) and on-premises networks. It is like a hub and spoke design or star topology design for connecting VPCs and on-premises networks. Transit Gateway allows customers to connect thousands of VPCs together. It is a regional service. It gives you simplified connectivity to the multiple VPC as compared to a complex VPC peering connection. Traffic between VPC and Transit Gateway remains on the AWS global private network and is not exposed to the public internet. Transit Gateways in different regions can peer with each other to enable VPC communications across regions. Transit Gateway inter-Region peering encrypts all traffic, with no single point of failure or bandwidth bottleneck which helps you to get improved security.

The following are the key concepts for Transit Gateways:

How do Transit Gateways Work? 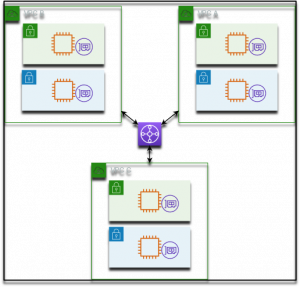 Architecture for Connecting 3 VPCs in a Different Region

Transit Gateway route table for the attachments shown in the above diagram:

The following diagram shows a Transit Gateway with VPC attachments in a different region. 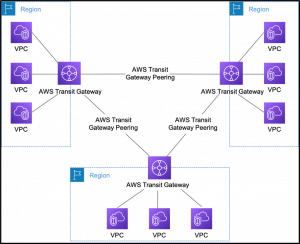 You can create, access, and manage the Transit Gateway using any of the following methods:

AWS SDKs — It provides language-specific API operations and removes the complexity of the coding. It is used for Amazon S3, Amazon EC2, DynamoDB, and more.

Step by Step Guide for Working with Amazon Transit Gateway

a. Login to AWS management console and go to VPC service, in the VPC dashboard click Launch VPC Wizard

d. Select NAT Gateway to None, VPC endpoint to None, and enable DNS hostname and DNS resolution. Then click on create VPC.

b. Under the name tag give the name TG1, under description put AVPC-BVPC-TG.

b. Under the name tag give a name to any of your attachment, in Transit Gateway ID select the Transit Gateway which you created in step 3 (a), in the Attachment type select VPC.

e. Follow the same step to create the Transit Gateway attachment for B-VPC

f. Your transit gateway attachment console should look like the below.

4) Update the route table of both VPC with the entry of the Transit Gateway attachment.

As an example, if you have a Transit Gateway in Ohio(us-east-2) region and an Amazon VPC is attached to it then the pricing will be like below:

We are on a mission to build a robust cloud computing ecosystem by disseminating knowledge on technological intricacies within cloud space. Our blogs, webinars, case studies, and white papers enable all the stakeholders in the cloud computing sphere to advance in their businesses.

To get started, go through our Expert Advisory page and Managed Services Package that is CloudThat’s offerings. Then, you can quickly get in touch with our highly accomplished team of experts to carry out your migration needs. Feel free to drop a comment or any queries that you have about Audio-to-text Automated Conversion, AWS Transcribe, or any other AWS services we will get back to you quickly.

Q1: Can I connect Amazon VPCs with the same CIDRs to the Transit Gateway?

Ans: AWS Transit Gateway does not support routing between Amazon VPCs with the same CIDRs.

Q2: How many AWS Transit Gateways can you create per AWS account?

Ans: The default quota for the Transit Gateway per AWS account is 5. This quota is adjustable using the AWS support case.

7 Responses to “Simplifying Your AWS Network Architecture with Transit Gateway”