Docker is on the verge of becoming one of the most popular virtualization approaches which uses Linux containers as a way to segregate application data and underlying infrastructure on your shared resources rather than virtual machines. Docker automates the deployment of any application as a portable, self-sufficient container which will run almost anywhere – including Microsoft Azure.

Associated with Azure Virtual Machines (VM’s), Microsoft Azure provides VM Extensions which are developed by Microsoft and by other trusted third-party providers. VM extensions enable security, runtime, debugging, management, and other dynamic features by which the productivity of Virtual machines can be exploited. The Azure Virtual Machine Agent is used to install, configure, manage and run VM Extensions. You can configure VM agent and VM extensions either during the VM creation or on an existing VM. This can be done using the Management Portal, PowerShell cmdlets or the xplat-cli.

So, using a Docker VM extension and along with the Azure Linux Agent we can create a Docker VM that hosts any number of containers for your applications on Azure. The Docker VM Extension has some very cool features like Docker Hub integration, Docker Compose support and Docker Hub/Registry authentication support.

Below are the steps to create a Docker VM extension through the Azure preview portal:

To generate certificates, you need to install Docker on your client machine (my client machine here is Ubuntu 14.04).  To download and setup Docker,  you need Curl. The purpose of curl is to transfer data to and from, from a server

In order to allow the client computer to be able to communicate to your Azure host using https, we need to create a self signed CA certificate, Server certificate and a server key.

Once the certificates are created, at your preview portal navigate to your VM for adding an extension as shown below:

By default Docker port will be 2376, you can provide any port number of your choice and click OK 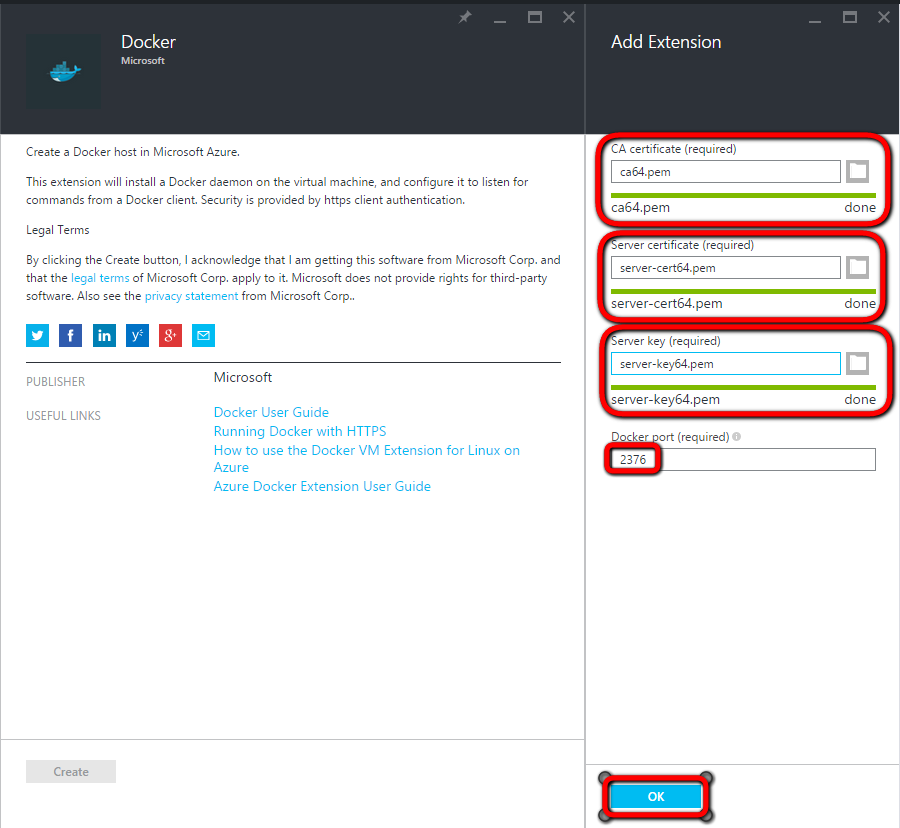 Container Apps help you automate the deployment of your applications which are isolated software containers running in single virtualized instance. For E.g.: If chosen “Docker on Ubuntu Server”, Ubuntu server will automatically install the VM extension along with latest Docker engine pre-installed. Since the cost associated with provisioning and managing VM’s is reduced, you are now in a position to leverage your cloud instance to gain maximum with these container apps.

Well, this is just the start for Docker on Azure. Stay tuned and keep following for more blogs on Azure. For any further info, leave a comment.