This feature can be used to store business and application metrics in Amazon CloudWatch.  Also, a graph plot is generated to give a visual interpretation of the metric. Custom metrics can be setup on almost all services such as Amazon EC2 instances, AWS Billing, Autoscaling, EBS volumes and Relational Database Services. In addition, CloudWatch alarms can be set and automated actions can be configured on the basis of these metrics.

Why use Custom metrics?

Amazon Web Services provides a wide range of metrics for EBS, EC2 and RDS services. Alarms can be configured on the basis of these metrics and actions like terminating EC2 instances, restarting them or sending messages to SQS can then be taken.

Each of these services have different metrics associated with them and Cloudwatch can measure metrics provided by the hypervisor like disk-read, disk-write and disk usage for EBS and CPU Utilization, CPU credit Usage.

Now let us see how we can configure a custom metric based on the above use case:

In the following steps we will configure a custom metric to monitor the active sessions of a particular user using an RDS instance and create an alarm for this custom metric to terminate EC2 instance when it reaches the threshold of zero.

The following code snippet can either be run on python interactive console or the whole code can be copied and run using it as a python script.

The following code gets the active number of users in RDS running MySQL and updates the custom metric based on that value. This script can be run as a cron job to get dynamic values where for every one minute the value of the custom metric is updated.

Note: For values like  CPUUtilization, AWS/EC2 cannot be used in the namespace and name field because they are pre-defined values and cannot be overridden. These values can be accessed by using the function:

The above code prints a list of metric name and metric namespace values which cannot be used in the custom metric function.

How to check whether the custom metric was created:
Step 1. Navigate to CloudWatch in the  AWS Management Console. A new dropdown menu called ‘custom metrics’ appears. Click on it. 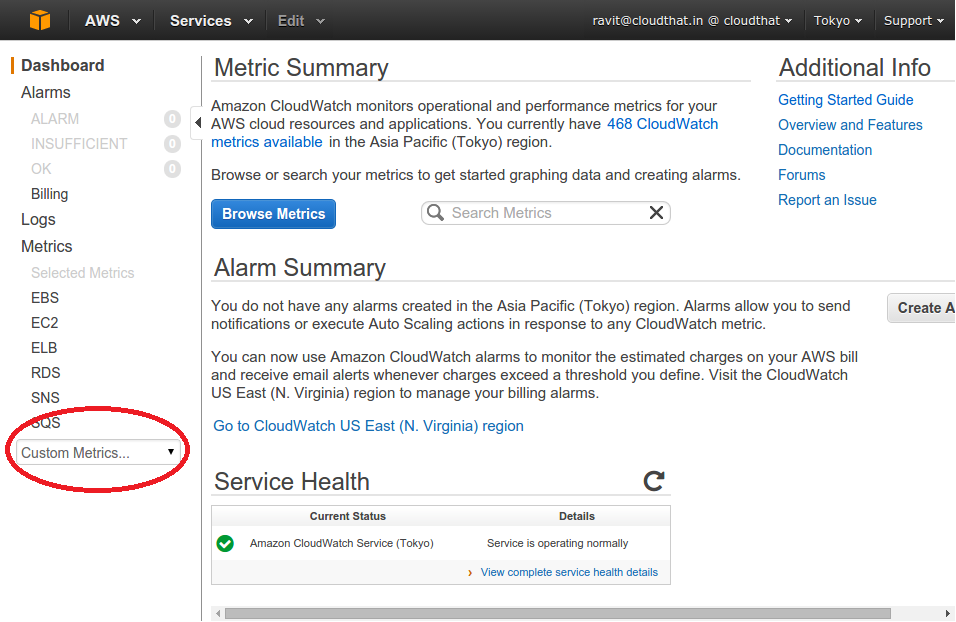 Step 2. Click on the drop down menu, the newly created metric’s namespace ‘my_namespace’ is displayed, click on it. 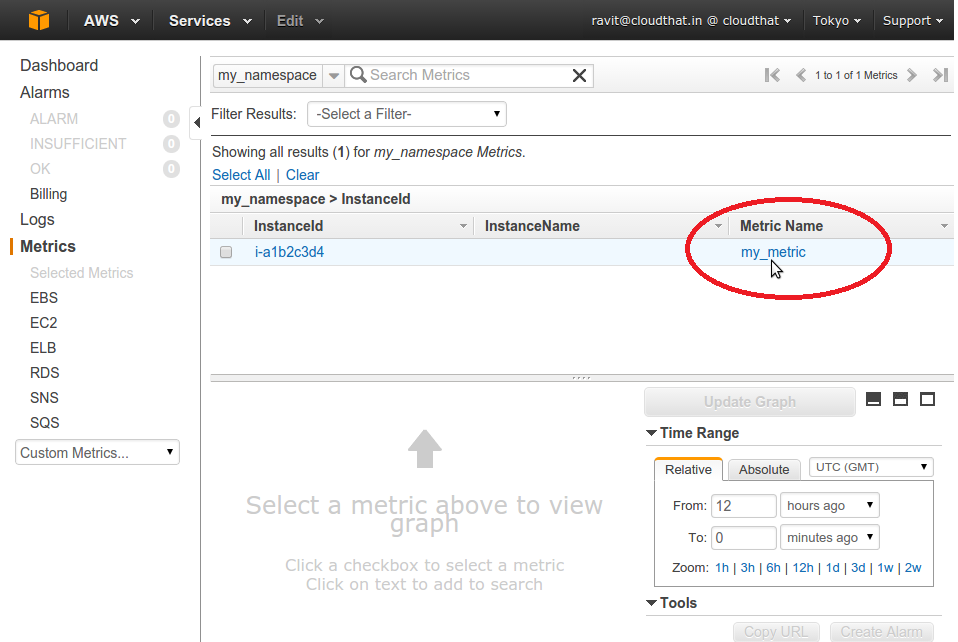 Step 3. The newly created metric ‘my_metric’ for the instance ‘i-a1b2c3d4’ can be viewed.

Creating a CloudWatch alarm for the custom metric

Now that the custom metric is created, we need to create an alarm for it. This alarm can be created  using the AWS Management console or can be done using the following script:

The following code snippet creates an alarm called ‘my_alarm’ for the custom metric. Whenever the value of the custom metric is zero for 5 minutes time period the alarm terminates the EC2 instance.

Note: The put metric data must actively supply the metric value in order for the alarm to be in ok state or else it will be in insufficient state.

Perform the following steps to view the alarm using the AWS Management console .

Go to AWS console and open CloudWatch and select ‘alarms’. 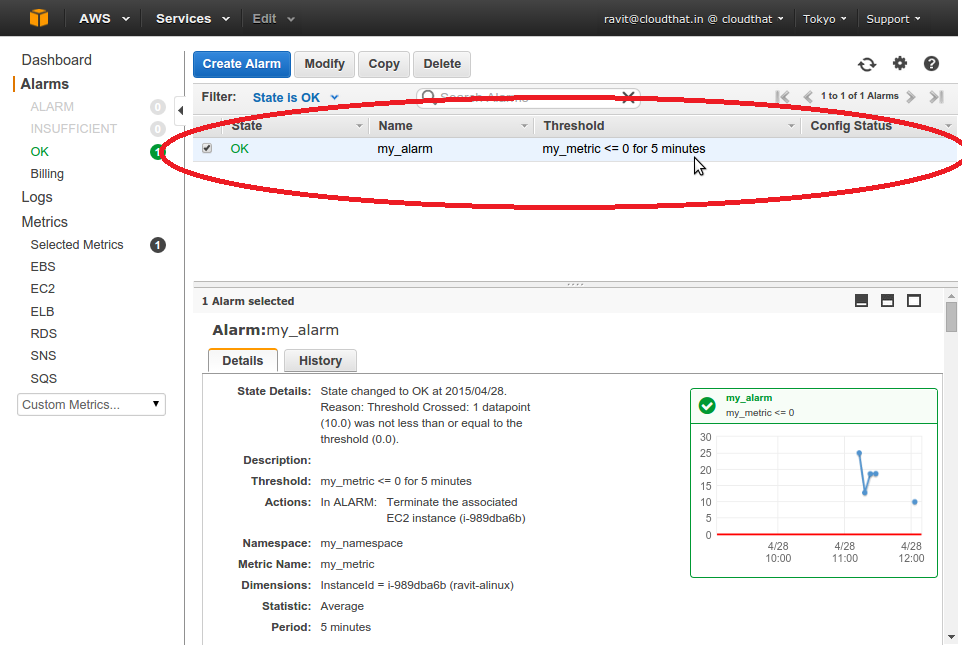 Using the above steps, we have created a custom metric called ‘my_metric’, gave it a static value of 10 and associated it with an EC2 instance. We also created a CloudWatch alarm called ‘my_alarm’  configured the alarm  to terminate the instance if the value of metric is zero for 5 minutes. The alarm will go in insufficient state if the custom metric has a static value. The metric created should have dynamic input at a fixed time intervals so that the alarm is in ‘ok’ state. This can be achieved by using a cron job to supply dynamic values to CloudWatch.

For further queries regarding creation of custom metrics, please feel free to comment below and I will be happy to answer.

Leave a Reply to abderrahman 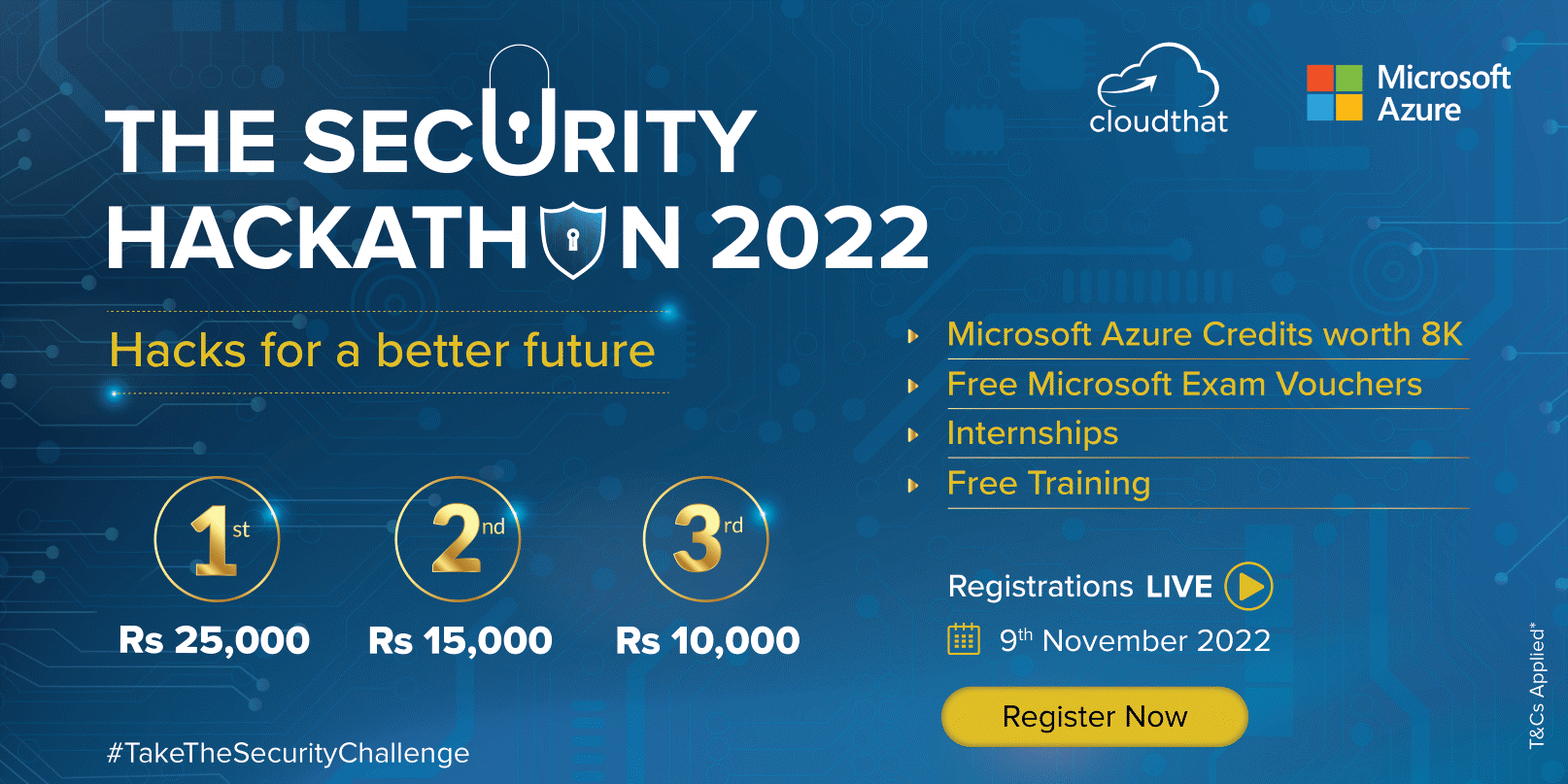