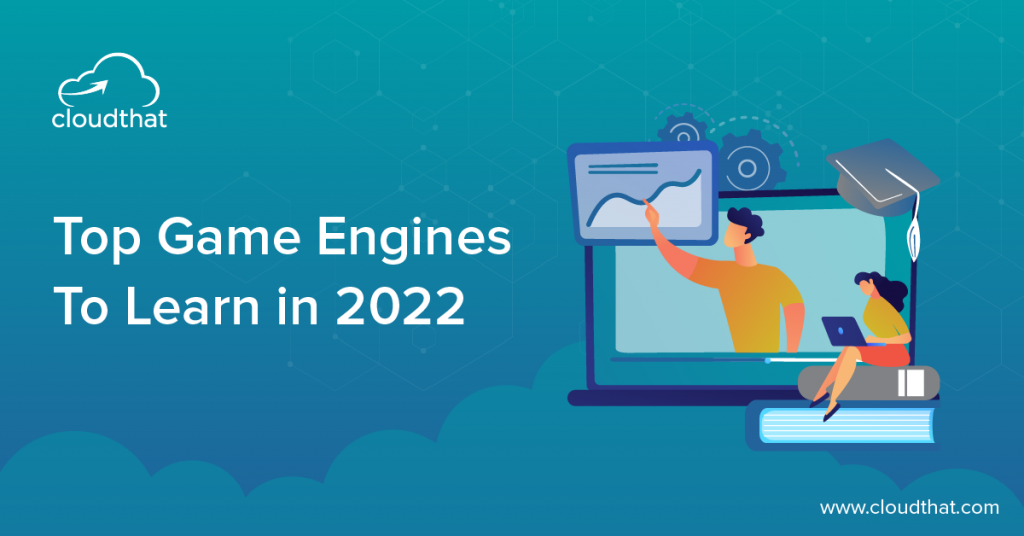 In recent times, the gaming industry has remarkably grown. The gaming market has rapidly enhanced and become popular with increased smartphone usage. In a multi-million dollar business like this, game developers seek a new and better game engine for their gaming applications.
Before we know about game engines, we need to know what game engine is? Game Engine is software with the help of which the game developers develop the games. In other words, it is a framework that brings all the essential tools required for building the games together. Therefore, choosing the correct game engines from an ocean of options is crucial based on the requirements.

Let us now have a look at each Game Engine in detail.

Unity is one of the most popular game engines in the world. We have seen many games developed within Unity, and we have also seen Unity being used to create mobile games. Unity is a cross-platform game engine that conveniently enables developers to create 3D content. It supports both 2D and 3D content along with VR and AR development. Along with this, Unity has a vast community, and it has its own Assets Store, where it has free and paid packages. It multi-platform supports Mac, Windows, Linux, Android, IOS, etc. Some games built with Unity: – Temple Run, Assassin’s Creed Identity.

Unreal is also one of the most popular game engines in the world. It is Developed by Epic Games. It is essentially a game development multi-platform engine. Games created using Unreal Engine are supported on Microsoft Windows, macOS, Linux, SteamOS, HTML5, iOS, Android, Nintendo Switch, PlayStation 4, Xbox One. It has its Market place where assests can be purchased. Additionally, as the program is heavy on the graphics end, many people will find it requires a more powerful computer than other engines like Unity. Some of the games build from Unreal Engines: – Fortnite, Batman Arkham City, etc.

CryTek develops it; CryEngine is a full-featured sandbox editor that supports development for all major platforms, including Xbox, PlayStation, PC and Oculus. CryEngine is a free engine with a royalties system. The first $5,000 of annual revenue per project is royalty-free. After that, you have to pay a 5 percent royalty to Crytek and gaming giant Ubisoft maintains an in-house modified version of CryEngine from the original Far Cry called the Dunia Engine. It is heavily used in the later iterations of the popular Far Cry series.
Coco’s Creator

It is a tool focused on content creation; it has a suite of powerful features and is very user-friendly. It is a multi-platform game development tool that supports various platforms, including the web, iOS, Android, Windows, and Mac. It supports both 2D and 3D game development. They also give other solutions like Cocos 2D and Cocos 2Dx.

This Game Engine is by Amazon. This is mainly used to build 3D games and fan communities. It supports VR preview mode, visual scripting and also provides aid with twitch integration Adobe Photoshop, etc. With the help of Amazon Lumberyard, it is easier to build online multiplayer games. It uses C++ as a programming language and provides support for the Client topology and P2P.

Godot is free to use, and it’s open-source through the MIT license. Godot is an open-source development engine that runs on Windows, Linux, and Mac computers. The engine supports both 2D and 3D capabilities, and it comes visual editor and a flexible scene system for laying out game progression. Godot also takes a unique approach with its node and scene architecture to represent specific game functions. Additionally, Godot has its built-in scripting language, GDScript; it is a high-level, dynamically typed programming language that is syntactically like Python.

YoYo games create this, It is a 2D game development platform that requires no programming experience or knowledge. Instead, users can “point-and-click” to create games much faster than coding with native languages. GameMaker features a drag-and-drop chart for setting up instances, conditions, user input, and many other variables. In addition, developers can select actions and events from the library to help create the flow of their game. Although unfortunately, only a free 30-day trial is available, the fee should be paid for the full service. For those who prefer coding, though, it also offers its GameMaker Language to program custom behaviors that extend beyond what visual programming can cover. Overall, the engine is very beginner-friendly and opens up game development to just about everyone.

All the above-mentioned game engines are of them among the many game engines available out there, we have just picked a handful of them that we thought would be easy and quicker for beginners to learn. Ultimately, it is the developer who must decide which game engine should be used based on the requirement by keeping the best interest of the game that they are going to build.

We are on a mission to build a robust cloud computing ecosystem by disseminating knowledge on technological intricacies within the cloud space. Our blogs, webinars, case studies, and white papers enable all the stakeholders in the cloud computing sphere to advance in their businesses.

To get started, go through our Expert Advisory page and Managed Services Package that is CloudThat’s offerings. Then, you can quickly get in touch with our highly accomplished team of experts to carry out your migration needs.

1. What are the benefits of the Game engine?

2. What are the top features that a Game engine should have?